Analyze Your Facebook Ads For Shopify Dropshipping – Scale Your Success! 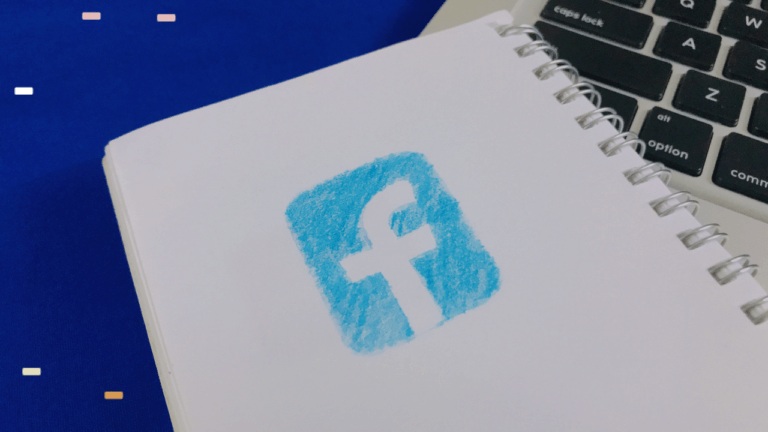 Is there a way to analyze the performance of a dropshipping Shopify ad? Many dropshippers are fortunate to have their ads live on Facebook but aren’t sure how to proceed.

Fortunately, Facebook provides helpful data analytics tools for advertisers. However, it’s a question of understanding how to use the information correctly. Once we get that straight, not only will we be able to measure our success, but we’ll learn how to scale our ads for greater outcomes.

So let’s jump right in and learn how to analyze our ad and scale it to the next level. 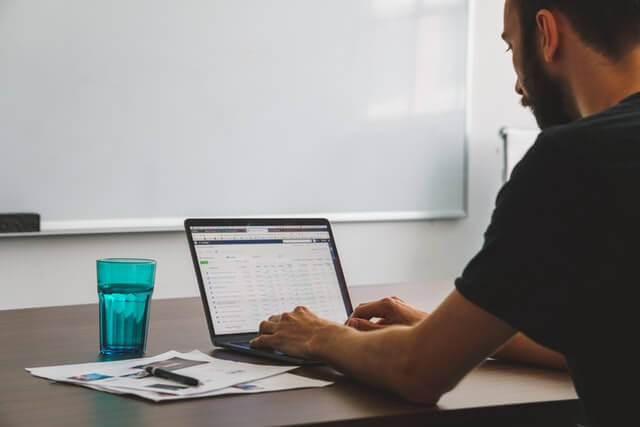 So you’ve done your research, configured your campaign settings, and launched your ad. Now what?

At this stage, a day or two after the ad goes live, the campaign results should appear on Ads Manager homepage. We’re going to analyze them in detail to see how the ad is doing.

Click on any of the three primary tabs (‘Campaign,’ ‘Ads sets’ or ‘Ads’), and slide over to the right where the different results data columns should appear. However, since there are many columns, it’s important to customize them so we can study and analyze the results correctly.

The process entails choosing which columns we want and listing them in a logical order. To begin, click on ‘Columns: Performance’ and select ‘customize columns’ from the dropdown menu. 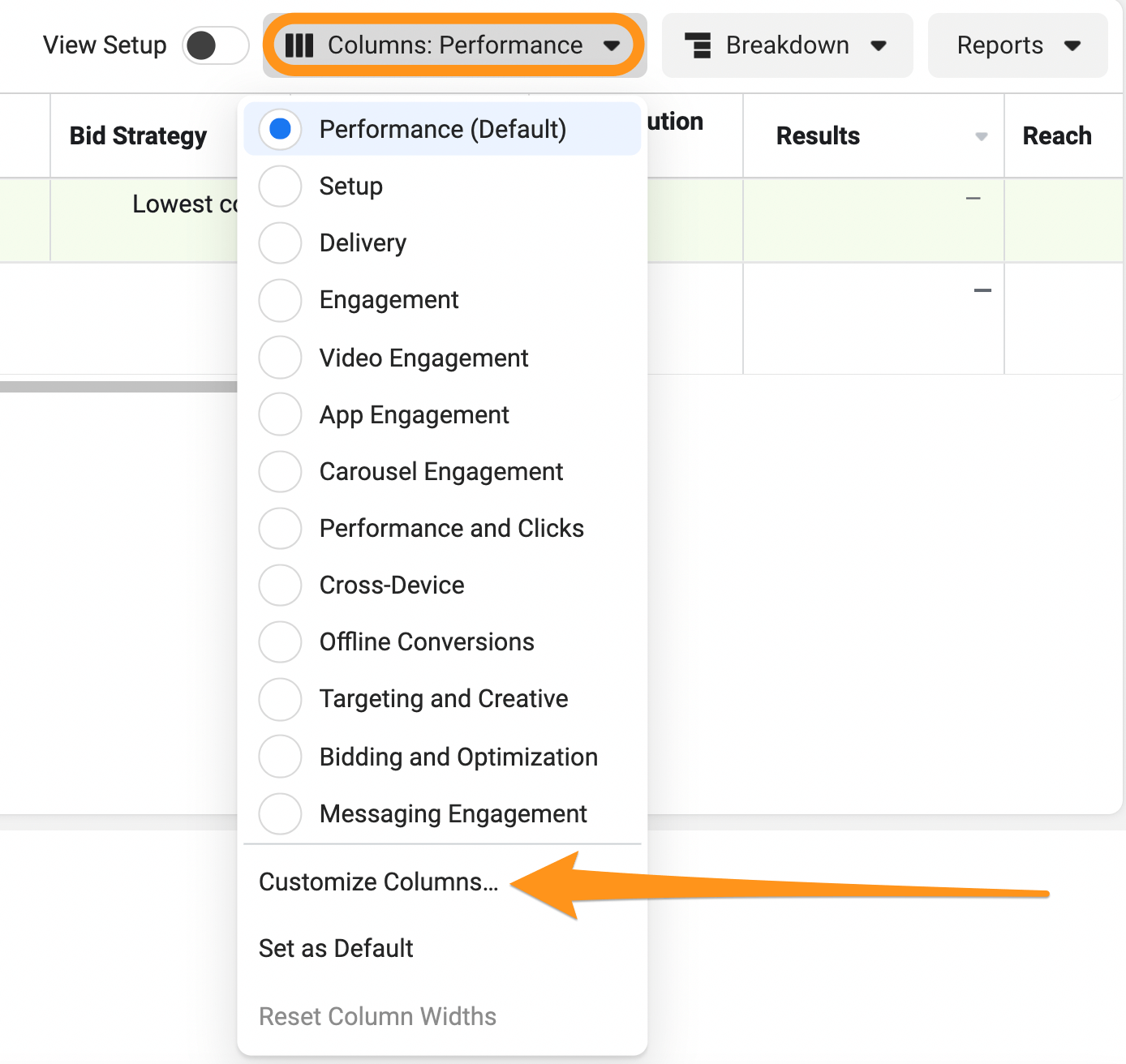 You’ll now see a list of metrics that help analyze your ad results. In the middle of the window, select which metrics you want to use. Then, decide what order they’ll appear in by dragging the different tabs on the right, up or down as needed.

We’ll soon cover all the different columns in the correct order. But for a more straightforward setup, follow the instructions in this document.

When you finish customizing, click ‘Save’ at the bottom left and name your preset. Saving these options ensures that you won’t need to repeat this process in the future.

Now that we have the columns organized, it’s time to analyze the Ad results.

The first few columns show information about the ad, including the ‘Name’ and ‘Delivery,’ indicating whether the ad is still running on Facebook.

Next up is the ‘Budget’ column showing the daily amount we spend followed by ‘Amount Spent,’  which is the total ad spend to date. In other words, if we spent about $15 total on a $10 daily budget, simple math shows that the ad’s been running for a day and a half. 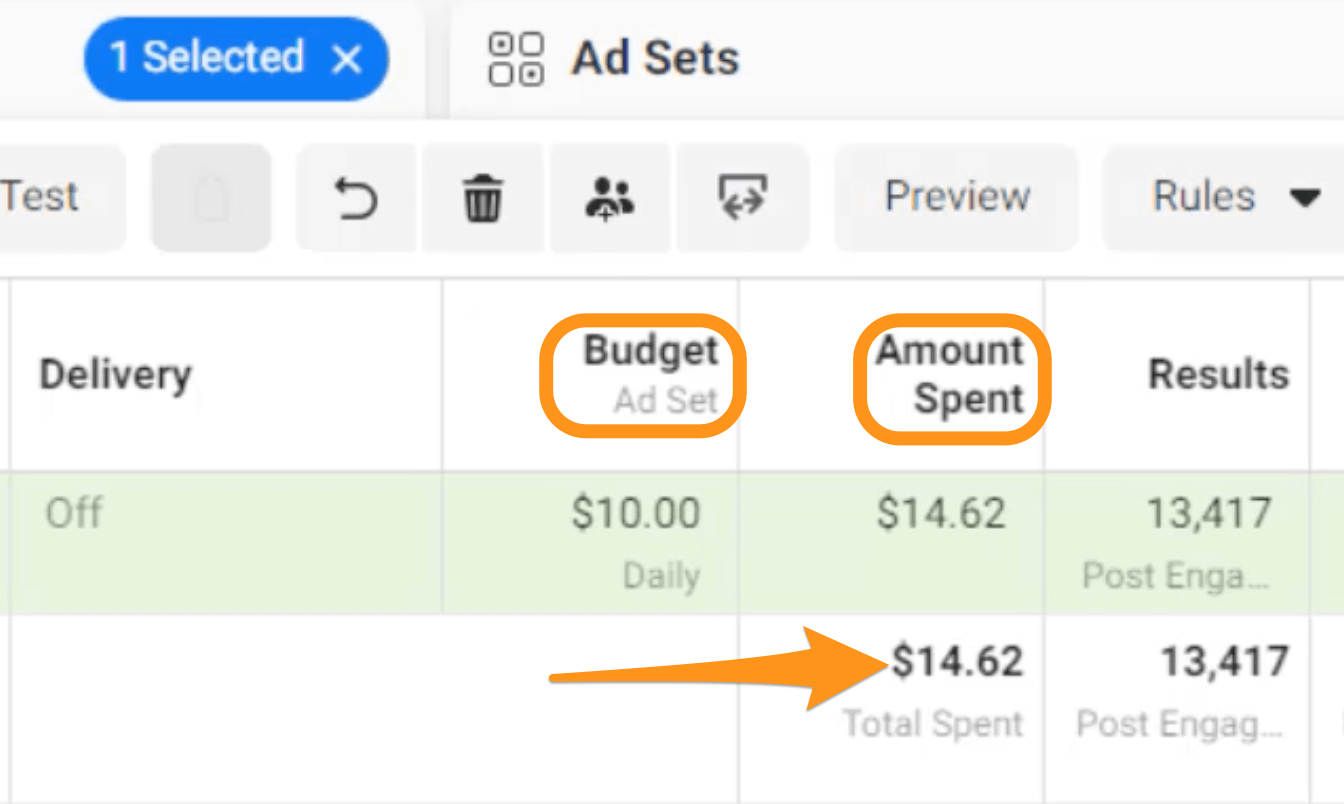 Once we have the initial info, we use that as a baseline to look at the results.

The next column to analyze is ‘Results .’ It shows that 13,417 people engaged with our post, which is already an excellent outcome for spending less than $15.

Then, we have ‘Cost per Result,’  which calculates the cost of each engagement. In our case, $0.001 means we paid a low price to get plenty for each post-interaction.

For example, our ad appeared on more than 35000 screens in under two days. Overall, you can add this metric into the success column.

While our primary goal is engagement, getting clicks to our website is always a nice bonus. When you see 223 in the ‘Link Clicks’ column after less than two days, it’s a good sign.

The next few columns provide insight into audience interest by analyzing video statistics. The more people view the video and the longer they do so, the more we can assume the video is interesting.

The column ‘3-Second Video Plays’ shows how many people played the video for at least three seconds. Any view lasting less than three seconds indicates a lack of interest.

In this case, almost half of ~29000 people watched the video for at least three seconds. That’s not bad at all.

The next column, ‘Video Percentage Watched,’ is no less impressive. At 48% we can interpret that almost half the people who saw our ad stopped to view the video, instead of scrolling away.

Lastly, the ‘Video Average Playtime’ column indicates high interest as the average person viewed this video for 7 seconds. For a video that is 14 seconds long, people are watching at least half the ad.

Next, we have the ‘Frequency’ column to account for multiple views by individual users. A good result here is always between 1.0 – 1.5, meaning that each person viewed the ad one to one and a half times.

Any number greater than 1.5 points to a phenomenon called “Fatigue.” In other words, the ad is reaching a small audience repeatedly viewing the ad and not taking any action. In our case, we got 1.21 which is perfect.

If you’re getting more than 1.5, consider expanding your audience size by adding more interests in audience settings. 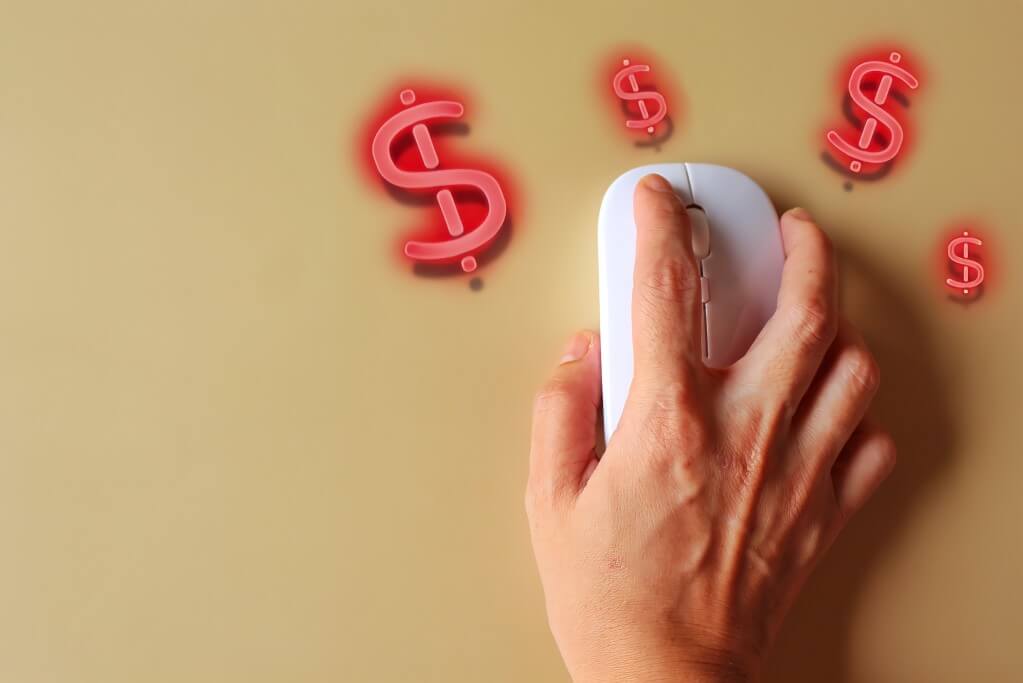 As we scroll to the right, we get data on how often people click on the ad and the cost of getting those clicks.

First comes ‘Clicks (all),’ the number of times people clicked anywhere on the ad box regardless of links. We got 621 which is relatively high. In contrast, ‘Link Clinks’ refers to people who clicked on our store link.

When our campaign goal was engagement-focused, two hundred twenty-three clicks to our store is a remarkable achievement.

But the reason we count all clicks is that any click is significant. The person stopped look at our ad and clicked on it. Perhaps they thought that similar to other ads on the web, the simple act of clicking would lead them to a webpage.

While getting all these clicks is nice, we want to make sure it justifies the cost. In this case, the ‘CPC’ column shows only $0.02 per click, which is a great value, especially since we did not aim for any clicks to begin with.

Finally, putting all the click stats in perspective, the ‘CTR (click-through rate)’ measures how many impressions resulted in a click on the ad. Our ad got 1.74%, which may seem minor at first glance. However, if you factor in the number of posts and ads competing for the customer’s attention, 1.74% CTR is an achievement.

The Cost Of Ad Appearances 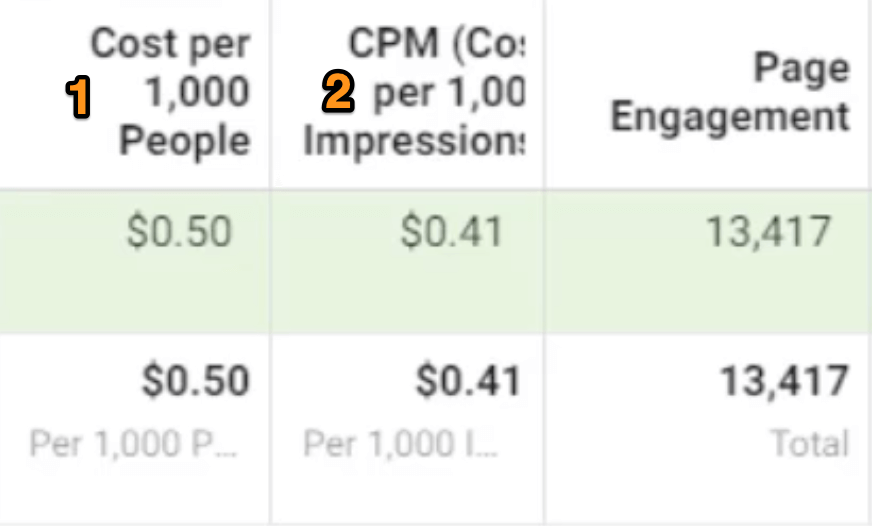 Another valuable way to analyze an ad is to see whether it is cost-effective. That’s why Facebook provides metrics on what it costs to show our ad to 1000 people. The ‘Cose per 1000 People’ column here indicates a value of $0.50, which is a super affordable ad spend. 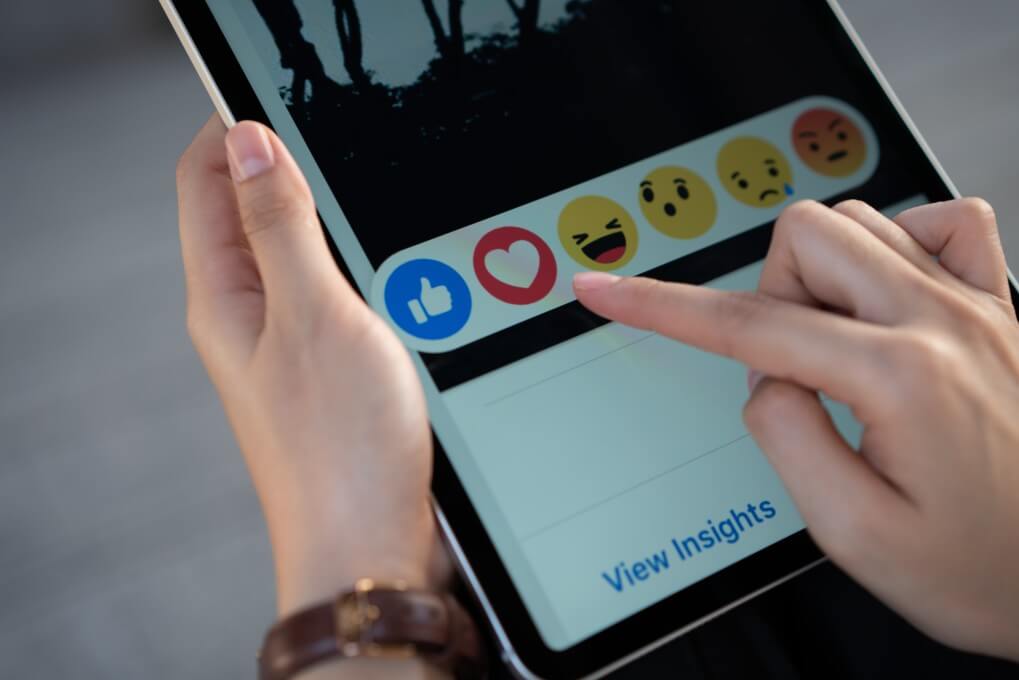 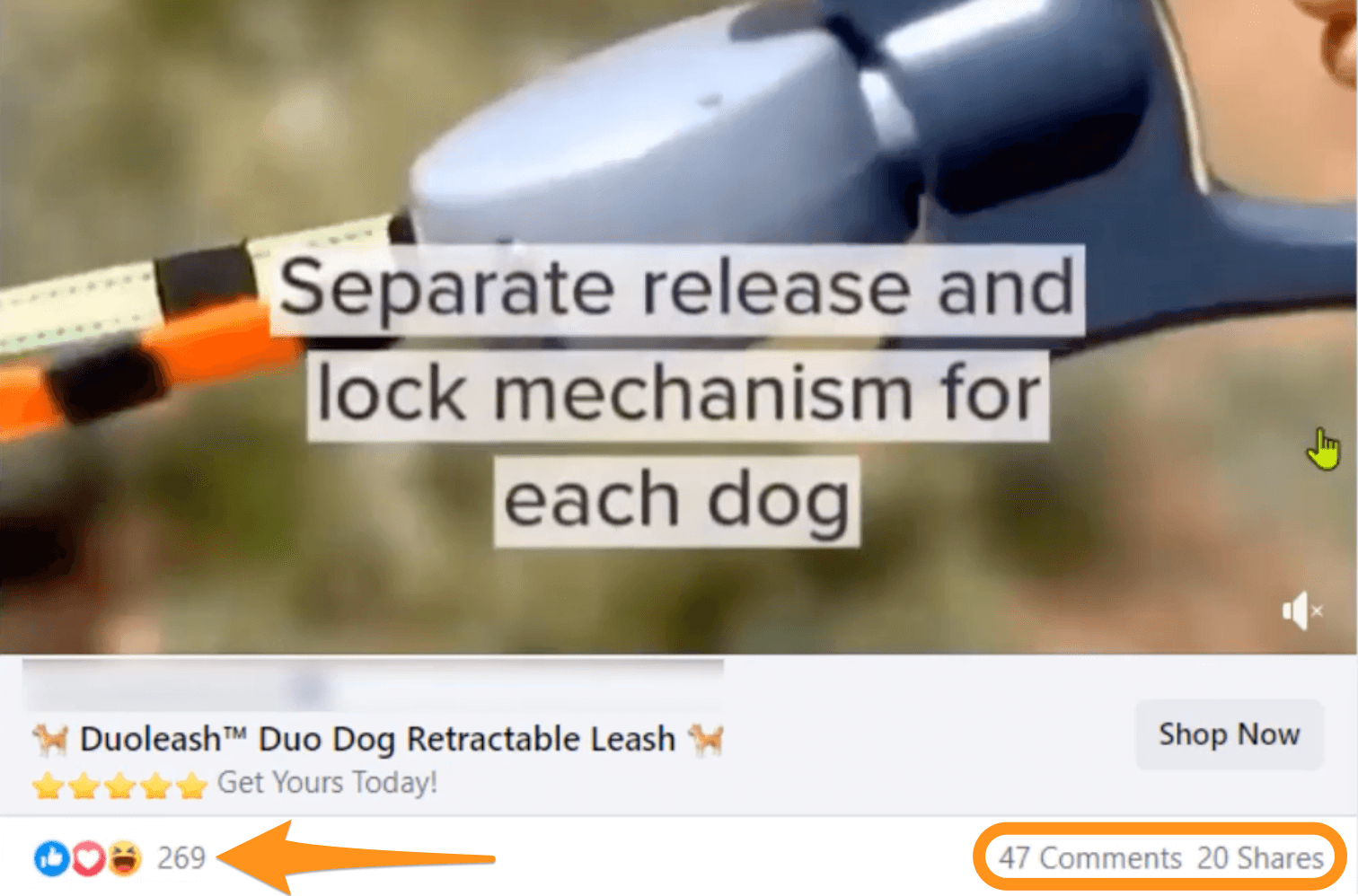 We received 269 reactions, 47 comments, and 20 shares, which are great numbers for an ad that’s been on the web for a day and a half. 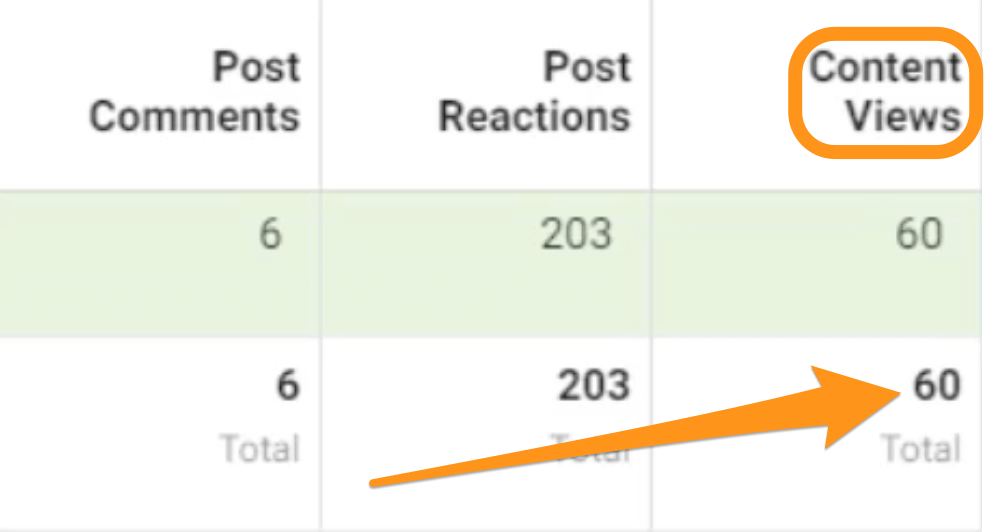 One of the last but most essential columns is ‘Content Views,’ which refers to the number of people who viewed a product on our website.

While the initial goal was to have the ad go viral, we’ve garnered enough interest that some people decided to view products on the website.

It would be silly not to capitalize on the apparent interest in the product. Therefore, we can take these content views and convert them into sales by starting a new conversion goal.

From those who view products, some may add items to their cart, or better yet, make a purchase. In our example, we got one add to cart, and one checkout initiated, but that person did not purchase. 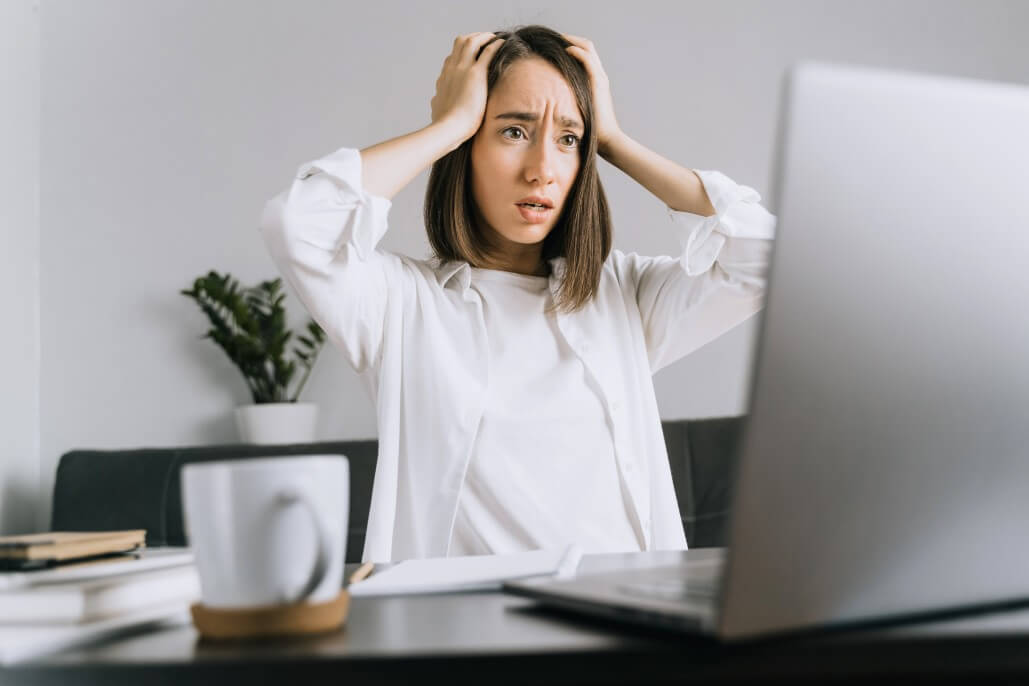 Are you not getting enough content views? That’s no reason to panic.

There are a few ways to increase content views on an ad.

For starters, you might be better off using split tests. Try to run three video variations of the same ad, and analyze them side by side. Often you’ll see that one ad performs better than the other two.

If split testing doesn’t do the job, then the campaign settings may need some tweaking. Try to review the audience demographics and see if you are going after the right interests.

Keep in mind that tweaking any element of an ad does not require you to reconfigure all of the settings. Simply duplicate the campaign and change the specific settings you want to test.

Other Reasons For A Low-Performing Ad 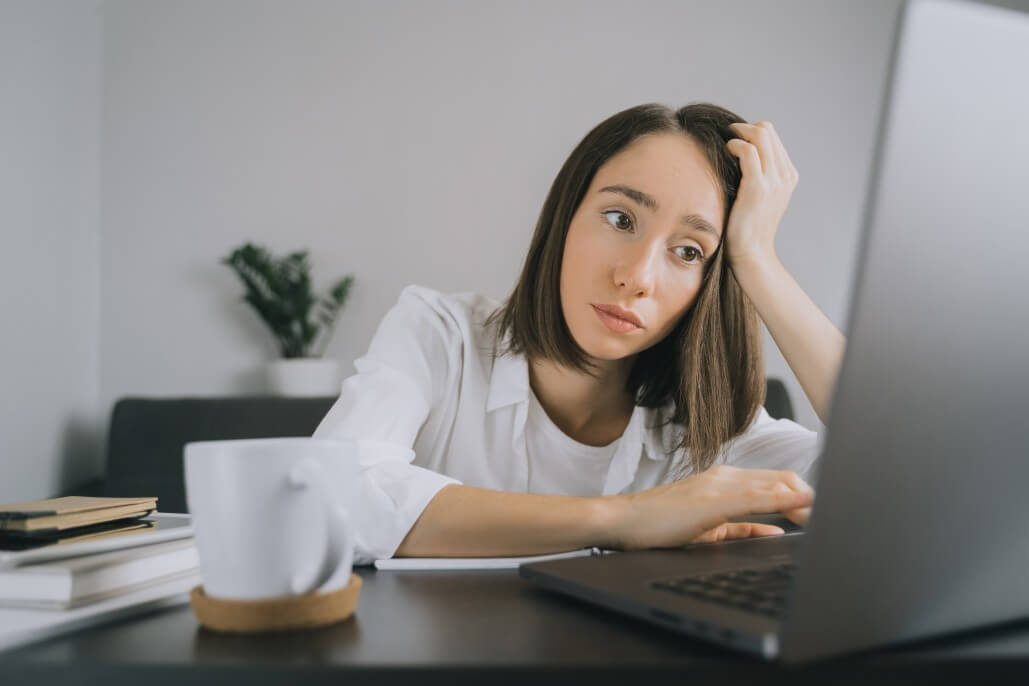 While it might be a tough pill to swallow, the product itself could be the reason for an underperforming ad.

When a product isn’t attractive enough, no advertising tricks can help. But that’s is no reason to feel discouraged. Realize that 99 percent of dropshippers do not nail it on their first product.

However, don’t give up too quickly on a product before you ruled out the issue of competition. Your product may be so popular that other dropshippers are taking up the ad space. In such cases, see if you can find a better marketing angle or new audiences that your competition hasn’t reached.

Scale Your Ad – Hierarchy Of Goals 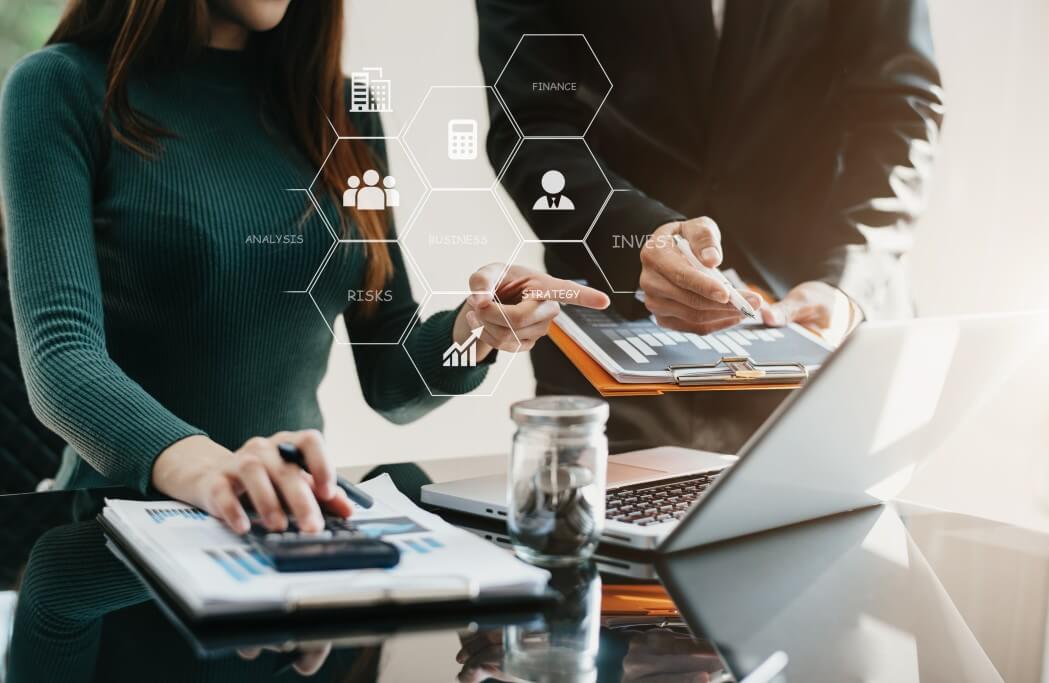 So far, we’ve learned how to analyze an ad and what to do when it underperforms. But what steps should we take if an ad performs well?

First, keep the ad running. It would be a shame to stop a campaign that is feeding our Facebook pixel with valuable data.

Then, start planning a conversion-oriented campaign to capitalize on the interest. However, don’t rush to the purchase campaign objective. The last thing we want is to overspend on a risky campaign that won’t get enough purchases to offset the ad costs.

Instead, it is better to test the waters by starting from a less expensive conversion campaign and gradually move up from there. Meanwhile, our Facebook pixel gets better and better at finding the most likely converting audiences.

How To Implement The Ad Hierarchy 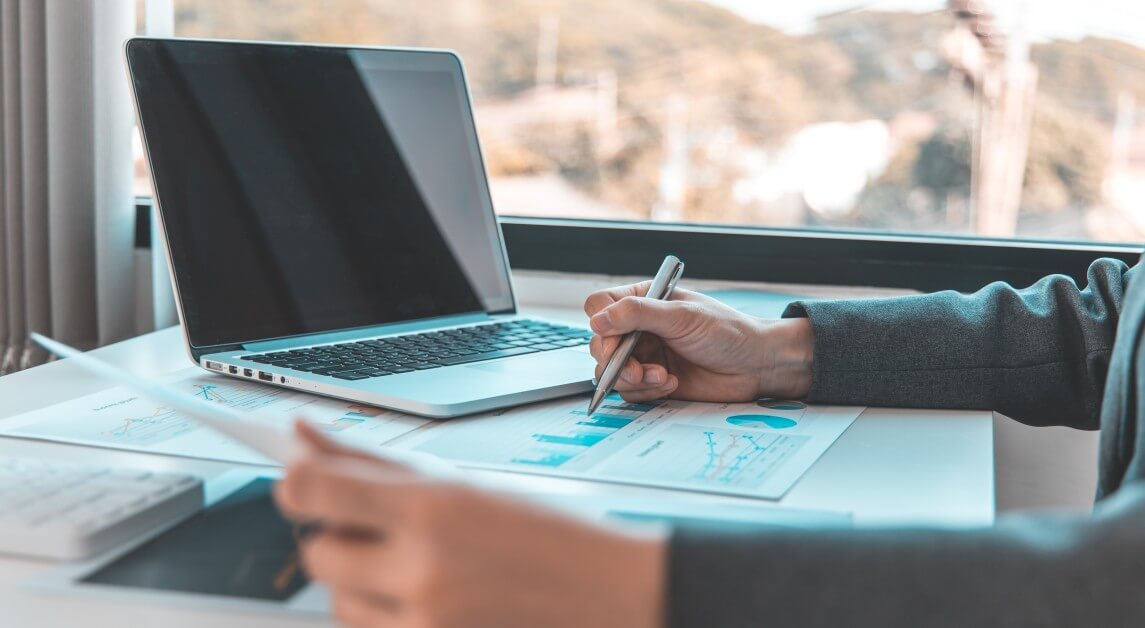 Getting right to it, keep in mind the number twenty. This figure is your signal at each step that it’s time to upgrade to the campaign goal. Here is how it works:

Naturally, the increased content views result in more “Add to carts.” So, after reaching twenty Add To Carts, it is time to move to an ‘Add To Cart’ campaign objective.

Are you starting to get the pattern?

As you guessed, in the new campaign Facebook finds audiences likely to add our product to their carts. A percentage of them will check out and make a purchase, but we want to keep this campaign going until we reach a minimum of 20 purchases.

At the twenty purchases mark, we can proceed to the most coveted goal of a Purchase campaign.

We wait this long and gradually train the Facebook pixel to zero in on the best audiences for purchase conversions. Accordingly, from here forward, we are going to see a recognizable climb in sales and profits.

And that is how you analyze your ads, feed the pixel and grow your profits.

Hopefully, your current ad is doing great, which means it’s time to scale with the next campaign goal!

But even if you’re stuck, don’t feel like the ad money is going to waste. Every ad dollar your spend builds knowledge that you can use to run a successful dropshipping business. So take it one step at a time and you’ll get to your destination.

Meanwhile, keep the momentum going with these conversion tips: 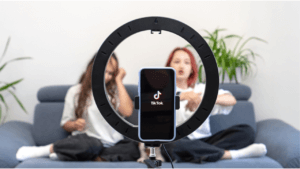 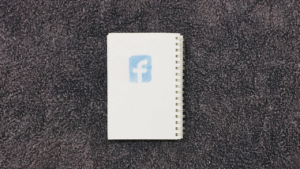 Marketing 34 minutes read
How To Create A Facebook Ad For Your Dropshipping Products: A Step-By-Step Guide 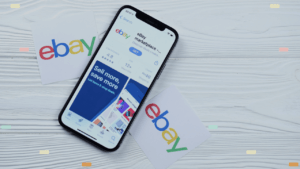